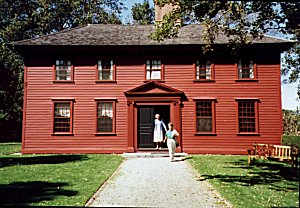 In 1725, George Berkeley published a “Proposal” to found a college in Bermuda to educate Native Americans and British colonists in the liberal arts and sciences and for the Christian ministry. He received a warrant from King George I and a promise of £20,000 from Parliament.

Berkeley, who was Dean of Derry in Ireland at the time, sailed to Rhode Island and arrived in Newport in January, 1729 with his wife, Anne Forster Berkeley, and several friends who planned to be teachers at the Bermuda college. Among these friends was John Smibert, who became an important portraitist in Boston.  Intending to wait in Rhode Island for the promised funds, Berkeley bought 96 acres of farmland on which to raise livestock and supplies for his Bermuda project.

Berkeley used his knowledge of architecture when enlarging the original dwelling on the farm. He incorporated features unusual for this period in New England: the formal facade, the hipped roof with lean-to construction, the false double front door and the cross central hall and stairway.

To this house, named Whitehall, scholars and clergy gathered. A literary and philosophical discussion group, forerunner of the Redwood Library was formed. Berkeley the philosopher wrote Alciphron or The Minute Philosopher while at Whitehall. Berkeley the educator later influenced the founding of King’s College (Columbia University) in New York. “Westward the course of empire takes its way,” a line from a poem Berkeley had written about his hopes for America  became the title of an 1860 painting by Emanuel Leutze, now displayed in the U.S. Capitol building. The poem also caused the University of California to name their city Berkeley.

After nearly three years in Newport, Berkeley realized the grant would never materialize so he returned to England with his family and belongings. Sadly, he left without his infant daughter Lucia, who is buried in Trinity Church, Newport. Soon thereafter he was made the Bishop of Cloyne, Ireland.

After Berkeley’s return to England, he gave his entire Whitehall estate – his house, farm and his library – to Yale College, with the annual profits to be applied to the maintenance of three resident scholars. Yale rented the farm to successive tenants, some of whom subleased to tavern keepers and proprietors of coffee houses. During the Revolution, British officers and their men were billeted in the house and appropriated the farm’s livestock and produce.

For more than the next hundred years five generations of one family successfully farmed their land. They outgrew the old house in the 1880s and  used it for the storage of hay. In 1897 three Newport women bought the abandoned house with a surrounding half-acre. After repairing it extensively, they gave it to the National Society of the Colonial Dames in Rhode Island who have shown Whitehall to the public every summer since 1900. A provision of their gift was that Whitehall should be kept and exhibited as a memorial to Berkeley.

Over the years, several important restorations have been made. Appropriate furniture and furnishings have been acquired by generous gifts and loans. An 18th century garden adjoining the house is maintained by the Newport Garden Club.

You are invited to make a donation to support the Berkeley library (click for holdings) in the Society’s Study Center at the Berkeley Museum House in Whitehall.

Whitehall is open to visitors during July and August, from 10 a.m. to 4 p.m. each day, except on Mondays when the house is closed. Tours will be guided by ‘resident scholars’ from Wednesdays through Sundays each week during those months, and on Tuesdays by other knowledgeable guides. During the remaining months of the year, visiting is by prior appointment only. Please telephone (401) 846-3116 or (401) 847-7951.

During the summer of 2019, the resident scholars are:

Whitehall is situated in Middletown, just outside Newport. (When the house was built in 1729, Middletown formed part of Newport, and was set aside in 1742.)

The International Berkeley Society was founded in 1975 to promote interest in the life and work of the philosopher Bishop George Berkeley. Its membership and leadership include not only scholars and philosophers from many countries, but also residents of the State of Rhode Island who are interested in the history and culture of colonial New England.
For more history of the Society